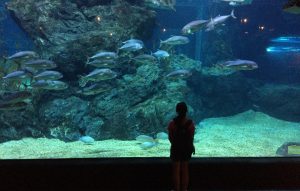 The minute hand of Quinn’s watch ran as fast as the possibilities did in her mind. It was silly. She knew he wasn’t like that and appreciated the effort he was making to get here at all. His project’s client was almost not worth it, but until it was his choice to make, here they were. Or here she was. She and her thousands of well-traveled friends.

Paul grew up on the west coast and ingested as much seawater as she did faux-healthy smoothies in high school. Passionfruit coolers were as close as she got to an island lifestyle in suburbia. His skin had absorbed all the sunlight it could before going off to college, and it radiated through, despite the dark and cold blanket that covered New England for most of the year. She fell in love with his brilliance. When it came to her turn to pick for date night, she wanted a place they could slowly amble together, not sitting in some dim space deciphering dish descriptions. She didn’t realize until now that most of the aquarium would wash them in a deep shade of blue anyway.

Truth be told, the place wasn’t her original idea. Or maybe it was. Her feed had served her an ad, algorithmically chosen based on her admiration for National Geographic photos and envy of her friend’s recent snorkeling trip in Australia. A night at the aquarium at a discount. She barely needed to think for herself. Somewhere there was an engineer she should thank. Maybe one of his friends.

Quinn had pointed out the California coast exhibit advertised on the website. It wouldn’t be an exact homecoming for him, but they could get a taste. She imagined him standing on his board and surfing above the multitudes of life below. He had only shrugged and said it should be fun. She thought it could be like college again. They had loved going to museums and exhibits around the city. They dared each other to narrate the introduction to the artist placards in their best imitations of snooty curators’ voices. He even maintained character when trusting tourists asked him to explain more about the artwork.

She stared at the card that detailed the distinct stripes of the delicate shrimp species in the picture window-sized tank. A second face suddenly materialized in Cheshire cat fashion next to her reflection.

“When did you get here?” Quinn asked and offered him a smile. She looked for indicators of how his day had went.

“I came straight from work.” Paul immediately took her hand in his and steered her towards the entrance to the rest of the aquarium.

Her imitation of Jean-Jacques Cousteau could wait.

She broached the subject. “How was today?”

Paul scrolled through a new email on his phone. “Not bad, not good. We found a mistake in our model that had been holding us up this whole time. It got fixed, not a big deal, but I’m still frustrated.”

The summary made it possible for her to understand, but she wondered if the conversation could go longer if she knew more about the work he did. She could take classes.

“Makes sense. It feels like you lost time that you didn’t need to.” Quinn bent down to peer at a dimly lit tank housing a rare octopus species. Paul followed and craned his neck to get a glimpse.

“Yeah, exactly.” He confirmed. “I can’t see this thing. Maybe it’s asleep. How about you? How were the kids?”

Quinn sighed. The class she inherited this year provided more than enough opportunity for her to stretch her teaching skills and make a difference, as the corps had advertised.

“You know that quote from commencement I’d taped to my desk?”

The inner edges of Paul’s brows met as he thought. “Uh, no…?”

“Okay, well it was from the end. The laundry list. ‘Prevent apathy and inspire action.'” Quinn reminded him again. “I think I’m succumbing to apathy.”

“You’ve only been teaching for a year. If real teachers gave up this early, where would we be?” Paul swung their hands back to emphasize. Quinn dampened the motion as she led them to another tank.

“I didn’t mean it like that. But if you really don’t want to do it anymore, you can quit anytime.”

“I can’t,” she replied. “I know I can make it through another year. I don’t want to give up on those kids like that.”

“Then you won’t.” Paul said quickly. As far as he saw it, he knew she wouldn’t, and so there wasn’t anything else to discuss. After giving this routine report of their days, they shifted into silence.

They walked at a pace not much faster than the large fish swimming languidly in their clear cages. She drifted toward the touch tank, and Paul followed.

“I thought you were too scared to do this?” He asked, swishing his finger in the water. “You can’t even feed a giraffe at the zoo.”

“Starfish don’t have large teeth, however blunt.” Quinn gently stroked one of the arms of a purple specimen.

He cleared his throat, and then a voice worthy of a BBC documentary sounded. “As you’ll see here, we’ve found a rare starfish species with small, serrated rows of teeth on the underside of their arms.”

“You’re bluffing.” Quinn smiled but still retracted her hand from the water. “And why would they need teeth underneath?” She waited for him to counter, but it didn’t happen.

Paul appeared to read the placard intently. She didn’t understand the change until she turned to see a father and his daughter walk in to the section. They couldn’t be the children in the room anymore.

Quinn and Paul joined hands again, and she steered them to the exhibit she had wanted them to come see.

The tank looked like it was two stories tall, and that was just from their standing view. The glass wrapped around most of the wall so that it felt like the fish weren’t on display but the human visitors were instead. Glass also made up part of the floor so that braver guests could see into the world below.

Quinn marveled at how a place like this could have been built in such a crowded city. She should propose the place for a school field trip. It would mean she’d get to come and see it all again.

“Isn’t this place amazing?” she said to Paul.

“Pretty crazy,” he agreed. He looked down at his phone. “Hey, I need to take care of this. I’ll be quick.”

Quinn nodded and watched him leave. As he walked out of the unlit area, his skin regained its deep golden shade.

An aquarium guide waved to get the attention of the guests milling around. Quinn joined the group gathering by the edge of the wall of water.

“We have three species of sharks in our largest tank here in the facility, and they can all be found along the Pacific coast. However, our nurse shark is elusive, and you might have to look underneath your feet to find her.” The guide explained then suddenly pointed down. “There she is now!”

Quinn and a few other more curious listeners rushed over to the glass floor and saw the latter half of the shark glide by. Next to her, a man goaded his girlfriend or wife into crouching down to get a better look.

“I don’t see anything.” The woman replied confidently, trying to prove that she was in on the joke. He put his hands on her shoulders and guided her closer to the center of the glass. They brushed past Quinn.

The woman yelped as the shark’s snout appeared and then the rest of its thick and powerful body glided by. Quinn gasped in awe at the animal’s fearsome presence.

Paul had to see this. She looked up and then around but found no one to wave over. Her phone didn’t have any messages either.

Quinn turned back to the glass floor. She looked and looked, but she couldn’t spot the animal again.