Still slick with oil from its former owner’s fingers, the toy rested on its side across the table. The painted-on smile was perfectly shaped. He couldn’t wait to surprise his daughter with the find, if he did end up getting to keep it. She would be overjoyed. Each Happy Meal she had opened in the past few weeks had ended in a pout and his heart deflating a little. He could’ve gone to the cashiers to just ask for the toy she wanted, but his embarrassment held him back. He couldn’t say the name of the princess right, and “purple dress, purple” got him nowhere the last time.

But they might come back for it. They left their table not long ago, bellies full and mouths still chattering away. At least, if it was his daughter who had lost her toy, he definitely would.

Ten minutes. His favorite song out of the long and always unchanged soft rock soundtrack to the restaurant started playing. He let out a full yawn, sound and all, now that the place was cleared of all but the staff.

Maybe he could just take it now and pack it away with his things. If the family came back for it, they would understand. They would think that another kid took it, or that it had gotten bussed away with the rest of their uneaten food.

He reached for the plastic doll and righted it up onto its feet, then took out a napkin from his waiter’s apron pouch to wipe off the oil. Much better, and ready for his daughter to play with.

He rubbed his sore shoulders and neck and rolled up his sleeve to cover an oil stain his wife was sure to tsk at. Being open on a holiday meant more customers, but it also meant more heavy trays of food to run back and forth. Technically people could still walk in and order food to-go, but he was pretty sure he was done for the day. He would simply refuse. He only had energy left for the drive home.

He pictured his daughter’s face peeking through the window of the back door. She would be so happy with the toy. The thought that her joy might come at the expense of another child’s crossed his mind, but it didn’t stay.

The door chime stopped his daydreaming. His head jerked back up, and he craned his neck to see whether it was one of the people from the toy’s table. It wasn’t one of the flood of faces from today, and the person left when they were told it was too late to order even to-go. He let out a breath that he didn’t realize he was holding.

“Where did you get this, daddy?” She grabbed it out of his open hand with the eager force of a delighted child. Immediately she started twirling it in the air, choreographing dances and spinning stories in her head that he could only wonder what they were about.

He smiled wide and said, “It was meant for you, so I found it.”

That was all she needed to know. 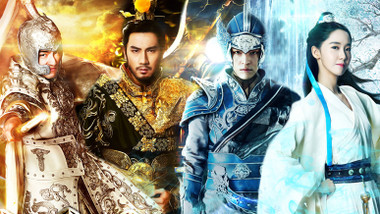 Recently I’ve rediscovered Viki, a site I often visited in college when I was due (or not) for a study break. Suffice it to say that I am open to all kinds of life advice (quit your job, travel, don’t quit your job, etc.), but I tend to ignore the occasional “don’t waste your time on TV” line that shows up in listicles.

Viki’s layout has changed a bit since I first started using it to watch my beloved Asian shows, while the offering has expanded significantly. You can find content from Korea, Taiwan, China, Mexico, Indonesia, the Philippines, and more places. Put it another way, Viki has made content that may be filed under niche genres in other SVOD services into its main value proposition.

With their international expansion, Netflix has stepped up its efforts to bring in just this type of global content. Viki’s original show Dramaworld has started streaming on the SVOD giant’s site, and Netflix is also looking to license Descendants of the Sun, a Korean show already on Viki. On first glance, these content plays make obvious sense for Asian markets, but explore the comments section under any episode on Viki. You’ll find discussion among fans in English, Spanish, Russian, and some Slavic languages I can’t name. It’s proof that TV can bring the world together (no drama intended).

This phenomenon becomes abundantly clear when a South Korean pop star carries a huge part of the draw to God of War, Zhao Yun, a Chinese martial arts fantasy. Girls’ Generation member Yoona is heavily featured in the marketing materials, and at least when I watched the first episode, the comments in the video player were from fans clamoring for her first line. (Spoiler: she does not show up yet.) It wouldn’t be an exaggeration to say they were watching the show only because of her. This cross-pollination is not new though, as South Korean pop groups often include members from China, Thailand, and elsewhere.

Towards the end of the episode, I kind of felt the same. My curiosity about when she’d make her appearance was what kept me watching. There is a slight Game of Thrones aspect to the saga, but only slight. I realized halfway through that I just couldn’t connect with the story, and I was plain confused by some bits.

At one point, our gang of heroes come across an imposing white tiger mom who leads them to a trap, where she implies that she needs their help extracting her babies safely. They do, and a sentimental moment ensues as they acknowledge each other and separate on their respective paths once more. Perhaps the symbolism will come through later on in the series.

A strength contest occurs in the Chinese emperor’s court, where soldiers magically lift a heavy metal cauldron with their bare hands. For Godfrey Gao’s character (you may know him as Magnus Bane in The Mortal Instruments: City of Bones movie), he does this with one hand. I’ve been away from the fantasy genre for a while, it seems!

You also can’t ignore the lavish and grand production design, and the language is incredibly poetic. It’s escapist drama at its best, although it still requires a significant suspension of disbelief. All the hallmarks of a classic Chinese period (and therefore, costume) drama are there, but now they’ve been upgraded for the modern omni-Asian entertainment fan. They may study Chinese in school because it’s the business language of the future, listen to Korean pop in the car, and have a passion for Tex-Mex. …Or maybe I just described myself!