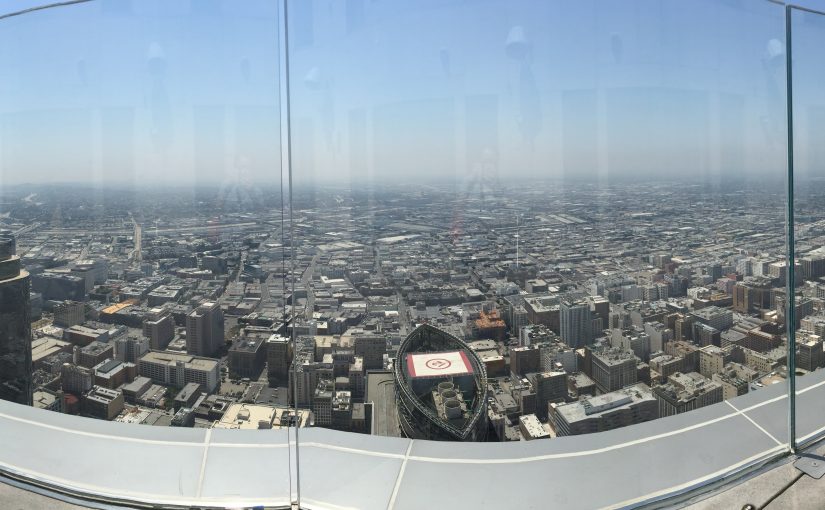 This past weekend, Los Angeles welcomed its newest attraction the Skyslide atop the OUE Skyspace LA observation deck. (Yes, I read that as “Wee Skyspace,” too.) The deck sits atop the recently renovated U.S. Bank Tower, and I learned that the building is the tallest one west of the Mississippi river while waiting in line for the slide.

As someone fortunate to have traveled to many places, I’ve been to the top of my fair share of tall buildings. I’m happy to say that the awe I feel each time has yet to be dampened, since I just find it utterly incredible that humans can build so much so high. Maintaining a sense of wonder, oddly enough, keeps me grounded.

I think it’s the same reason I didn’t hesitate to buy a combo ticket for the Skyspace and Skyslide once I scrolled to a targeted ad in my Facebook feed. It goes to show that as strange and creepy as advertising has become nowadays, it sometimes works. In my daily life, my body rarely travels more than four stories up from the ground. And a shot of adrenaline was something I sorely needed. What better way to get it than sitting on a mat and sliding down a glass slide from the 70th to 69th floor? 🙂 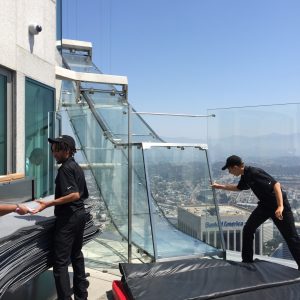 Besides getting a hilarious souvenir photo of myself, my ticket also provided a reality and perspective check. A trip to the Skyspace is not cheap. Between the ticket itself and pre-paid parking, it’s about $40. (Believe me, pre-paid was worth it. DTLA parking? Good luck, bro.) Of course, if you go with multiple people in a car, the parking fee seems trivial. But realizing that I could afford this small luxury? That was a rush in itself.

Here’s my view from just before the actual slide…

They said that if you wanted to get the biggest thrill, you could look to the left out over the expanse of Los Angeles. Most sensible people kept their eyes straight ahead. I was not one of those people. I dared to look and scare myself, and for the brief four seconds I felt like the daredevil I always imagine myself to be but seldom execute against.

I spent the rest of my time on the observation deck. My friends who work in tall office buildings probably wouldn’t understand why (or might think the opposite), but I felt invigorated being so much closer to the sun than I usually am. My current work is rather elevated yet in the weeds at the same time, and sometimes I lose sight of the “why” of it all. I’m so focused on desperately trying to understand the numbers and check all the footnotes that the details wear me down instead of painting a clearer picture. Perhaps it’s just professional infancy that I’ll grow out of. It’s definitely why I eschewed Starbucks during the week for this ticket, and it was well worth the trip to get out of my headspace.