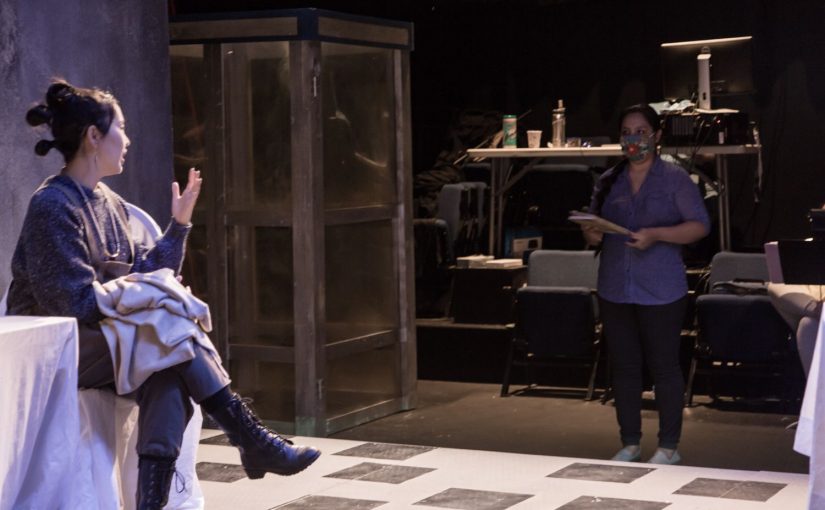 Forgive me for gloating, but I want to take a moment on this blog of mine to totally geek out and celebrate the team at Main Street Theater (MST) and myself for our work in staging the first “digital premiere” of The Book of Magdalene (promo video on YouTube here)! Today is the last date of the play’s digital run, and while it’s been a strange and difficult pandemic world for live entertainment to navigate, I am truly hopeful that more plays will be recorded going forward. Is it that I don’t believe live theater and events will ever return? Absolutely not. In fact, I am kicking myself for not going to more concerts pre-pandemic (but immensely thankful that Netflix has not one but two concert films of Ariana Grande’s). It’s because when I get to be part of a purposeful, meaningful, and hopeful new work, and also get to embody more diverse representation on stage, I want to share it with as many of my family and friends as possible. Although we filmed at MST in Houston, I had friends who could watch in San Francisco, London, Atlanta, and more. Many of them shared their impressions of the show with me, as well as messages that stuck with them, things that puzzled them, and general feelings of excitement and happiness for me. I am super gratified by all of these but especially the last part, because in those periods where I was stuck in traffic going to auditions and wondering if I should give up on my love for performing, I kept going with the encouragement of many of those same cheerleaders. This lead role was of course a win for me personally, but I also see it as a win for my support network and their love. I did not let them down.

Recognition from family and friends is number one, but it certainly got easier when the play was reviewed and covered in the New York Times, Wall Street Journal, Houston Press, and so many more esteemed outlets! For better or worse, recognition in one of these long-running outlets is an immense mark of legitimacy. I can confidently say for everyone at MST and myself that we were beyond thrilled! I’m grateful to all those who took the time to see and think critically about our show. I’ll share a few wonderful quotes below, followed by a few more behind-the-scenes photos…including my funny mug in the NY Times!!

“The dicey thing about putting theater online is how easy it is to, accidentally, make it seem like something else: a panel discussion on Zoom, maybe, or a not-great video. But Caridad Svich’s spare and immediate new drama, ‘The Book of Magdalene,’ feels every inch a play…even before a giant cicada puppet makes a fabulous cameo.”

“Symbolism-intensive and purposefully poetic in diction, “The Book of Magdalene” is not the sort of play to which I ordinarily warm, but its stageworthiness is self-evident, and Amelia Rico, the director, and Afsaneh Aayani, the set designer, have served Ms. Svich outstandingly well. Good cast, good costumes, and a giant insect puppet whose unexpected appearance (in both senses of the word) will startle you. Even if you don’t care for magical realism on or off stage, you should consider giving this one a shot.”

“[Len] is played by Jennifer Wang, whose beautifully luminescent performance is the anchor of this dreamy, poetic play…Delicately directed by Amelia Rico, the production features design that cleverly hints at the dystopian society without going full-out Mad Max. The sets by Afsaneh Aayani are spartan and effective and the costume design by Victoria Nicolette Gist is positively ingenious, featuring garments that are both familiar and odd. Both the lighting (by Grey Starbird) and the sound (by Janel Badrina) compliment the video format and provide nuance in the moodier scenes.”

“The austere set design, by Afsaneh Aayani, lends a proper touch of surrealism to Svitch’s verselike rhythms. (Both the Times and the Journal were rightly taken by a rather large cicada puppet’s scene-stealing walk-on.) Rico’s alternating between close-ups and wider shots, coupled with Grey Starbird’s haunting lighting design, help foreground Len’s inner turmoil.”

For the photo slideshow above, I of course had to highlight our amazing cicada puppet by Afsaneh Aayani!

I hope to have more happy updates for 2021, but even if there aren’t any more mentions in the papers, I am already super grateful for these memories to carry me through the rest of the year. Thank you!