I’ve been doing more daydreaming than putting pen to paper, but finally got myself to write in my story prompt journal yesterday while waiting for a movie. 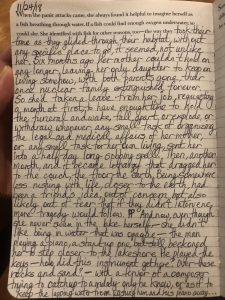 When the panic attacks came, she always found it helpful to imagine herself as a fish breathing through water. If a fish could find enough oxygen underwater, so could she. She identified with fish for other reasons, too—the way they…

My story response: …took their time as they guided through their habitat, without any specific place to go, it seemed, not unlike her. Six months ago her mother couldn’t hold on any longer, leaving her only daughter to keep on living somehow, with both parents gone, their once nuclear family extinguished forever. So she’d taken a leave from her job, requesting a month at first, to have enough time to hold the funeral and wake, fall apart or explode or withdraw whenever any small task of organizing the legal and medical affairs of her mother, or any small task for her own living, sent her into a half-day long sobbing spell. Then, another month, and it became lethargy that dragged her to the couch, the floor, the earth. Being somewhere less rushing with life, closer to the earth, had been a friend’s idea, out of concern, but also likely out of fear that if they didn’t intervene, more tragedy would follow.

And now, even though she never swam in the lake herself—she didn’t like being in water that was opaque—the man playing a piano, a stand-up one (but still)—beckoned her to step closer to the lakeshore. He played the keys—how did this instrument get here? Over these rocks and sand?—with a fervor of a composer trying to catch up to a melody only he knew, or as if to keep the lapping water from washing him and his piano away…

Partly inspired by: a post by @everchanginghorizon on Instagram, of a man playing a piano by a shore. Screenshot below. 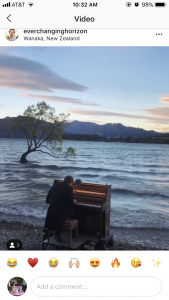